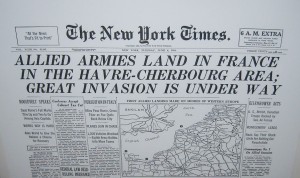 On June 6th in 1944 your soldiers landed at Normandy. Together with your allies, against the fierce resistance of the Germans, you put an end to National Socialism, the Shoa and the war of annihilation. Later you took care for democratic structures in western Germany. Without your victory the world would be more like a graveyard now.

But dear Americans, please don‘t believe that the people in Germany are very fond of you for that. Germans might be leftists, Christians or Nazis – but most of them agree in one point: they despise you. They might claim that they just criticize your policy but you can forget about that. Even the Vietnamese youth is less averse to you than the Germans. Anti-Americanism is courteous in this country.

This is due to German self-righteousness, which didn‘t – like you would like to believe – disappear at all. Like back in the times of the emperor or the Führer the Germans still believe that other than themselves everybody else in the world – and especially you – are egoists. You Americans are supposedly unfair, you start wars and destroy the environment. The Germans however fight for justice, peace and a happy environment. There is a quote that reads: „Am deutschen Wesen soll die Welt genesen.“ [The German essence should cure the world]. People have learned: today, this is inadequate to say.

Remarkably the Germans always feel morally superior to you Americans, when it comes to wars on butcherly dictatorships. There are, as is known, serious arguments against the Iraq war and you, dear Americans, are controversially discussing this issue. But in Germany it is not about arguments. There is just one attitude and it goes like this: “How mad the Americans are. We are way better. At least we make a stand for peace.” If they would bring forward arguments, they‘d have to face the fact that, if it would be in their favor, the Taliban, Saddam Hussein and Gaddaffi would still rage, torture and murder until today. But what those alleged peace lovers don’t want to hear is that they neither have a clean record. They weren‘t able to spell “Abu Ghuraib” before the US army had to face a torture scandal in this prison. As long as the Saddam-Regime was beastly murdering tens of thousands of people, the Germans didn’t really care. Back then, so they think, there was “peace”. This is the reason for mass demonstrations against the Iraq war, but when Assad in Syria – supported by Russia, Iran and China – slaughters and plunges hundreds of thousands into misery, there is no reaction in the land of the good. By the way, the Germans know well that one is guilty if one is not reacting with a military intervention. At least they know precisely that the allied forces are accessary to not bombing the rails leading to Auschwitz. In this case it is about you dear Americans. With the “politics of dialog” (Dialogpolitik) Germany stabilized the anti-Semitic terror regime in Iran. All this is for Peace, of course. When Iran‘s leaders are threatening Israel to be exterminated the Germans are barely worried. Ironically two thirds of them believe the Jewish state anyways to be the biggest threat to world peace. That doesn’t stop them from claiming constantly to have their lessons learned from history.

Dear Americans, the world wide observation performed by secret services is really a problem and there is a lot to criticize on your NSA. But well, the fact that states are spying on each other has the same news value like the message that on 31st December there is New Year ’s Eve. But in Germany people are upset about that like nowhere else. Not however when your diplomats are eavesdropped by Russia, this is rather welcome. But when it becomes evident that you are doing way better in this field than the Germans, they really get pissed. They don‘t do that you must know. Therefore in Germany people prefer to yell “NSA” instead of “NSU”. This is the German Nazi gang who, intoxicated by nothing but pure hate, murdered migrants for years while the secret service claims to have had no clue about it.

This comes as no surprise, considering where these services get their recruits from: a population whose majority rejects immigrants based on the belief that they wouldn’t belong “to us”. As you see, dear Americans: the Germans are that much better than you are.

Dear Americans, now we have to criticize you and your former president Bush as well. He made the world less secure. He strengthened terrorists and dictators who suddenly could hope for more support and sympathy. Or don‘t you think too that it was a mistake that George H.W. Bush in 1990 was the only leader of the victorious who vehemently promoted a “grand Germany” and even offered “partnership in leadership”? What was your benefit of that in the last 25 years? You got a muscle flexing rival who dominates Europe. A rival who never pardoned that you spoiled the attempt of world dominance twice and wants to do it better this time. Dear Americans, luckily some of your troops are still here. Please stay another 70 years, just in case. After all, you never know.